How to make a Christmas decoration with bunting. 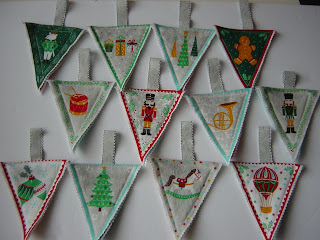 This is a very quick decoration to make. All you need is a Nutcracker Christmas bunting panel, some batting scraps, a pair of pinking scissors to cut and a sewing machine that can do a straight stitch, with a little bit of time . 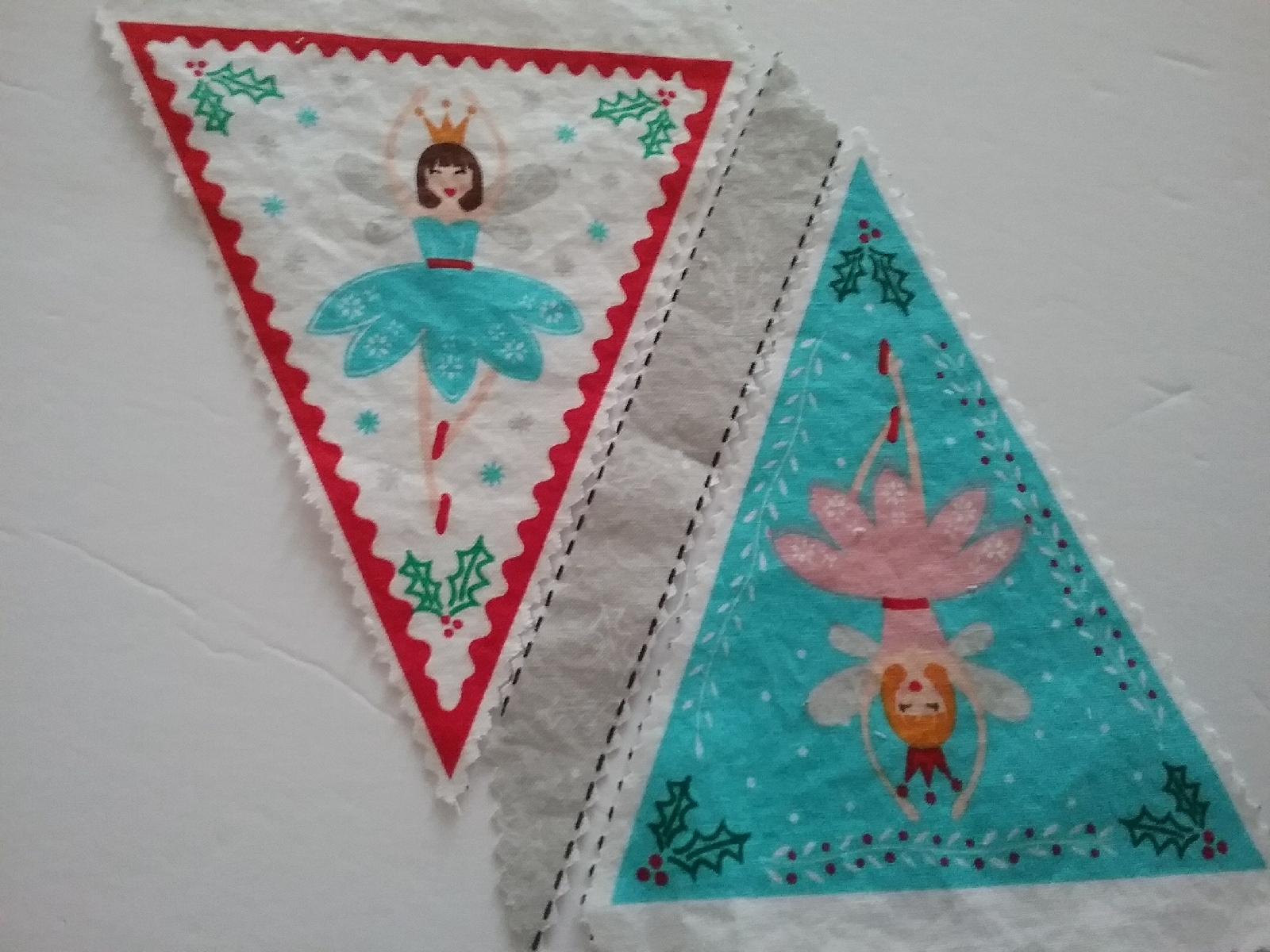 First cut out all the bunting triangles, keep the grey strips which joined them together, cutting on the dash lines around each triangle. Set aside, both triangles and grey strips. 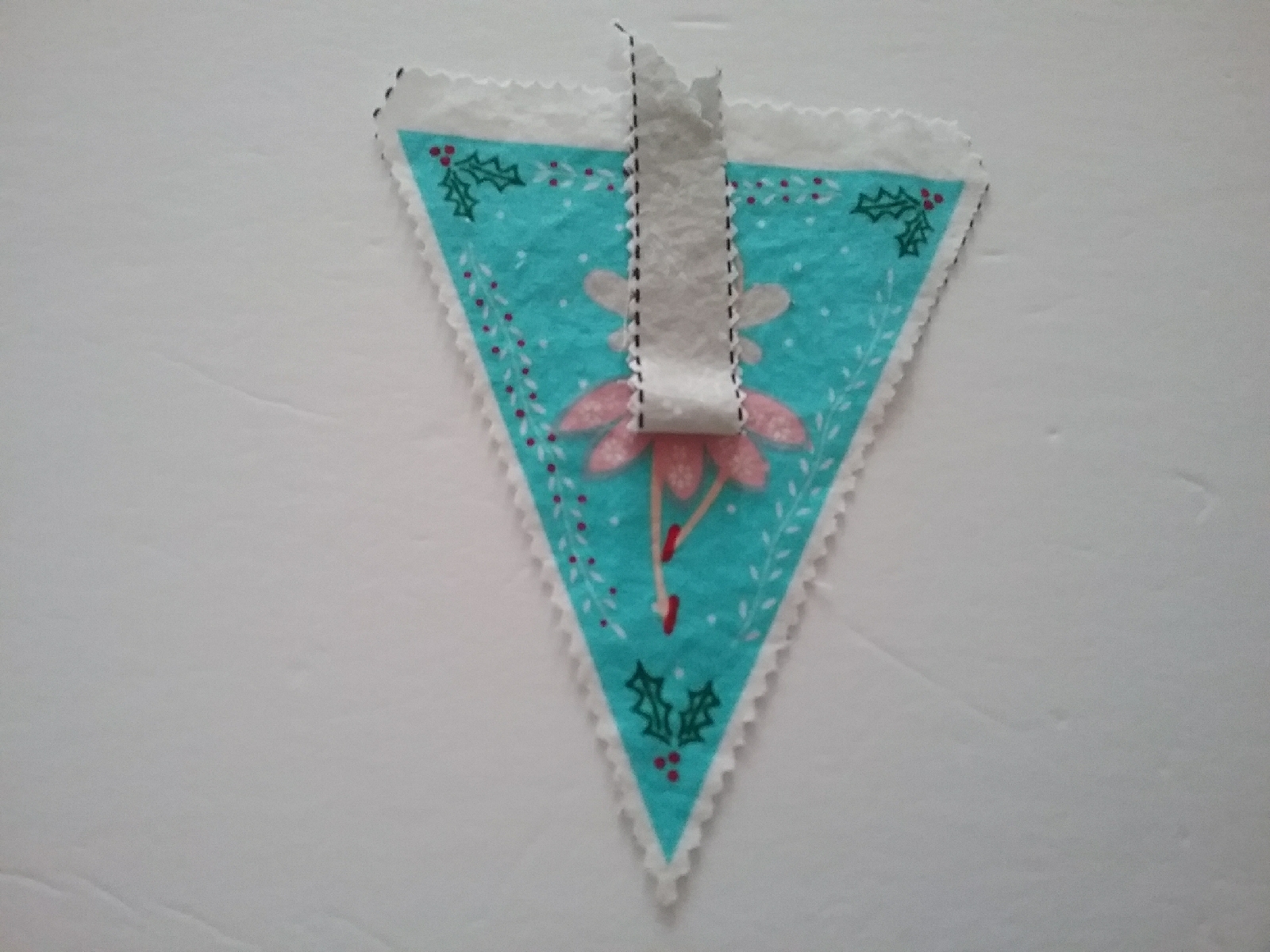 Next, take one grey strip, fold in half, with wrong sides facing towards the inside of the loop and place in the middle of one bunting triangles. 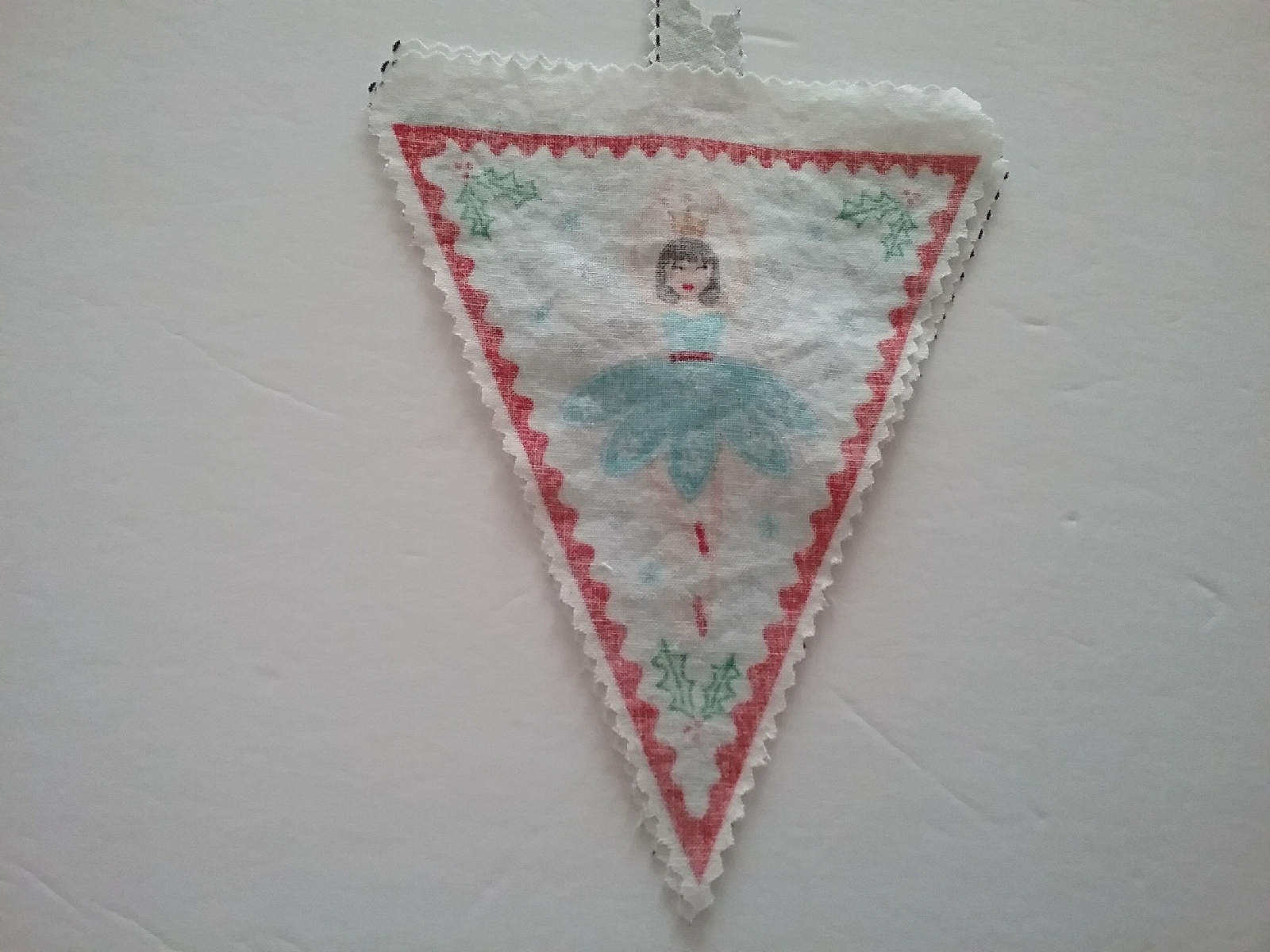 Now place another triangle bunting piece on top of the grey loop, right side facing down. 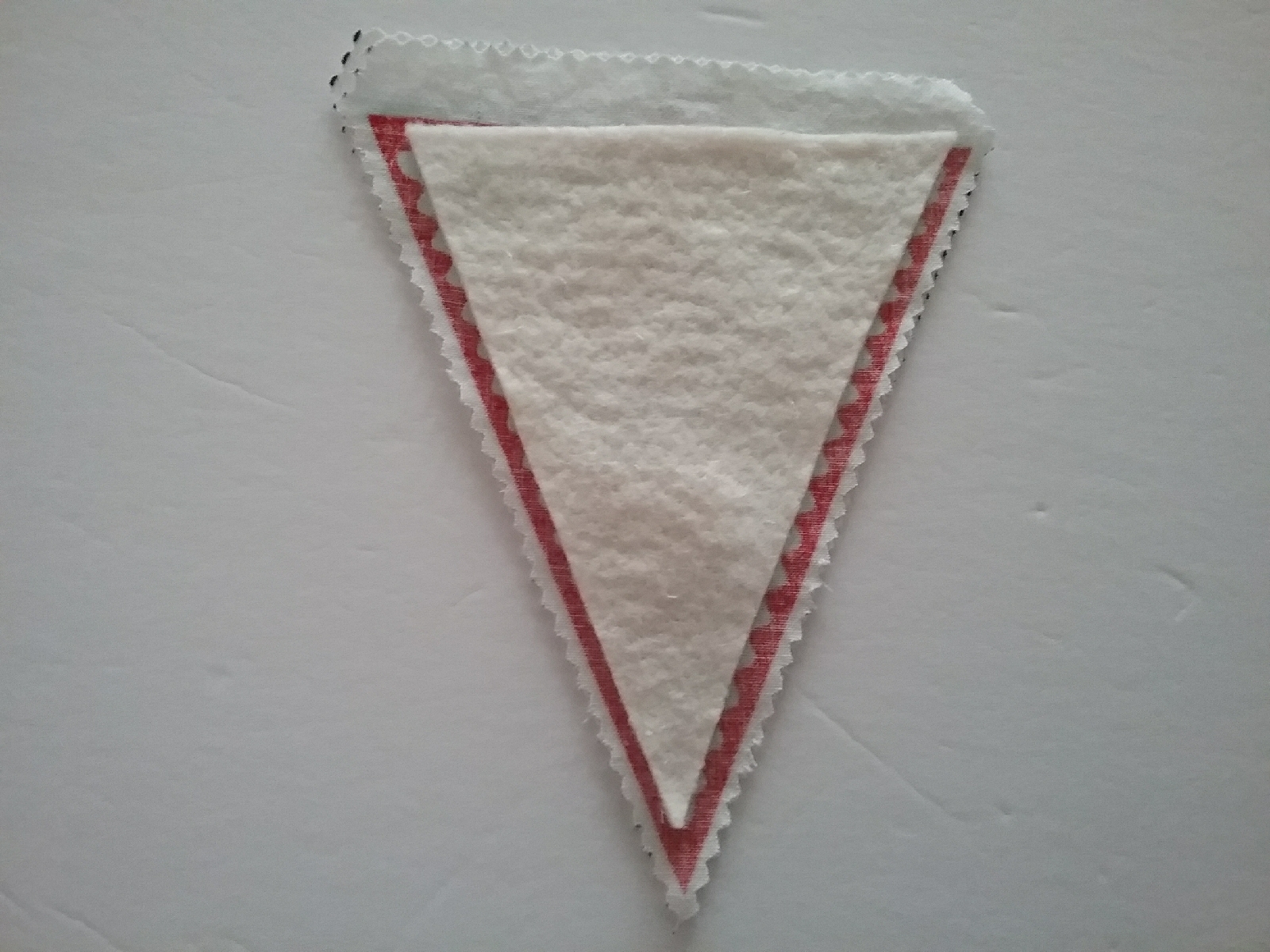 Place a triangle of batting, which is smaller than the triangle bunting on top of the bunting triangles. Stitch at the top of the triangle, catching the batting in the seam line. Only sew the line at the top. It will look like this. 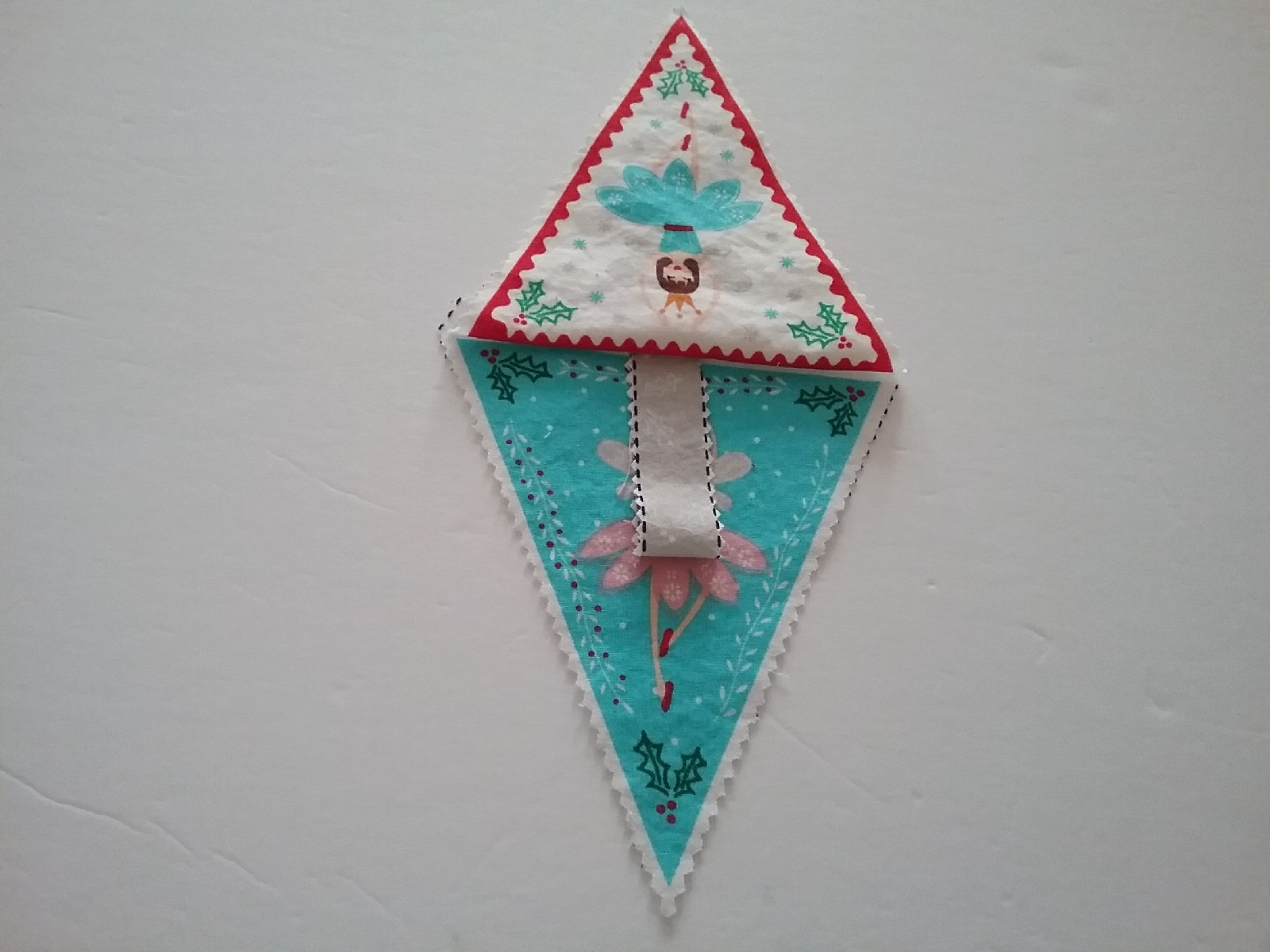 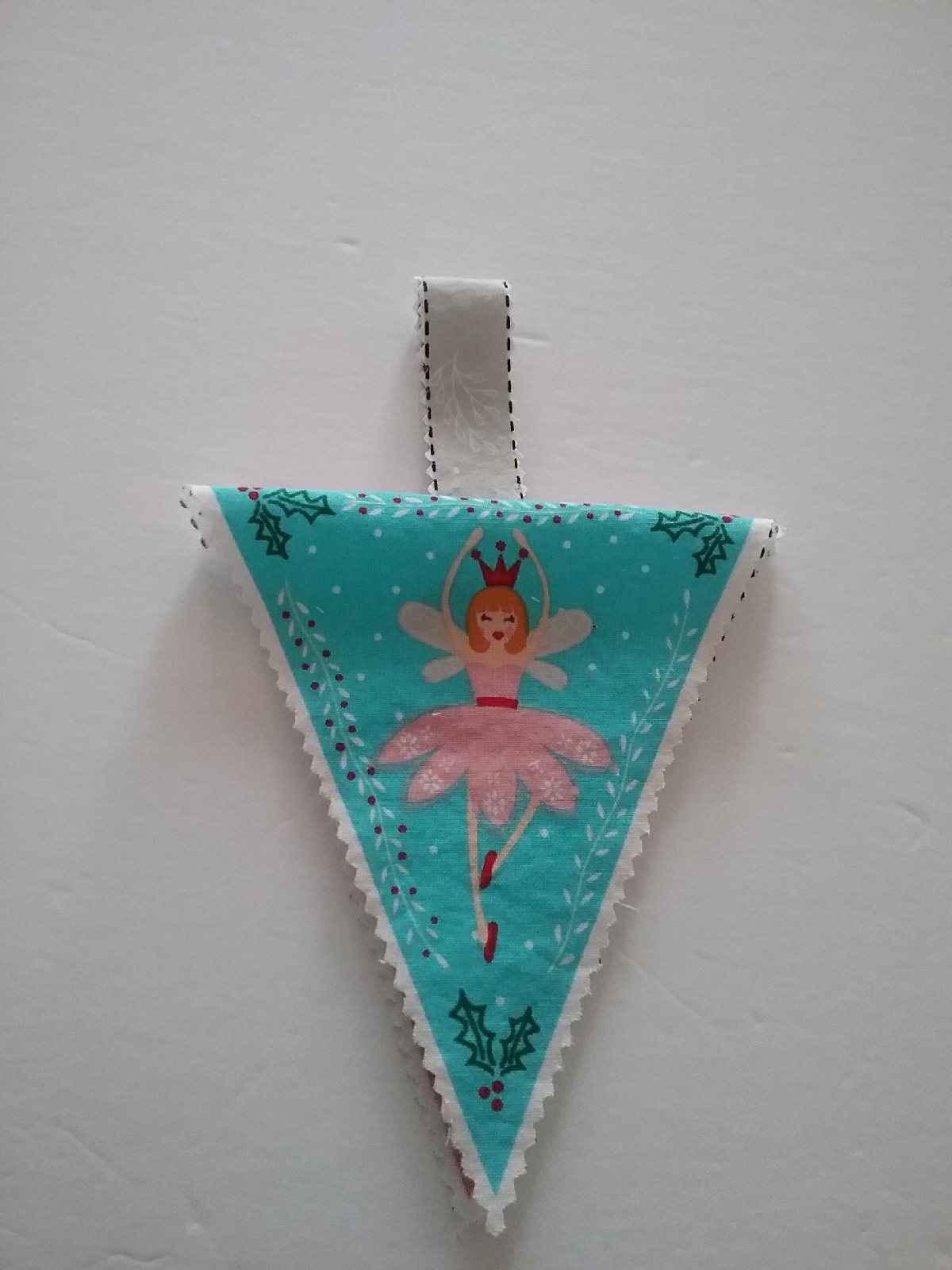 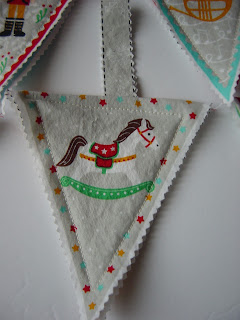 Your decoration is done, ready to hang on the tree.
Posted by Maggie at 06:52 1 comment: 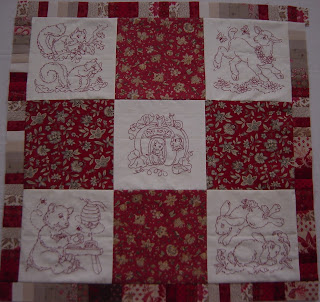 The Splendid Sampler is now on its way to be a finished top. Sorted all the blocks, only finished 46? Then when it was all laid out,  realized it has a lot of red fabric which just stood out. 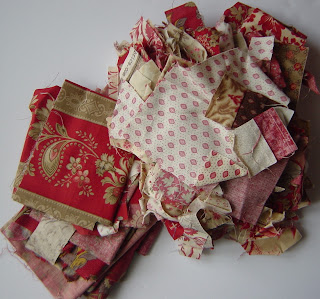 Looked at the leftover fat quarter's and decided to cut blocks out of those fabrics. It will reduce what would have been more scraps?  Instead it will be used as blocks. 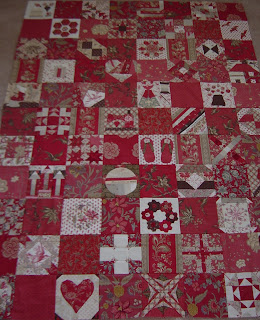 The blocks already made will be squared today, to 6.5 inches. They will be placed in rows and sewn together.  Added the leftover strips from a bargello around the top.  This top will need a border next to these strips. 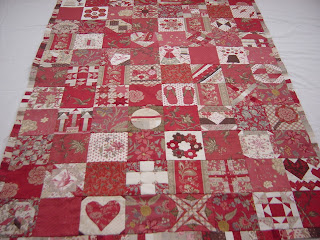 This flimsy will go in the pile of tops to be quilted. I have painted the house over the past five years, just one more room to paint.  Now my quilting frame can be set up for me to start hand quilting the tops. The frame is still packed up, from our last move, over 5 years ago.  It will be good to get it out and use it again. 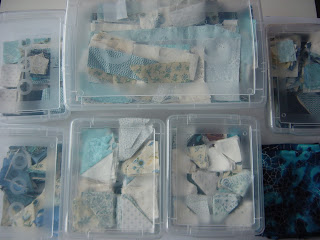 Tidied all the leftover fabric from 365 challenge quilt, squares, triangles and strips in different sizes. 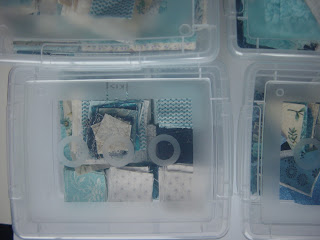 Ready to use, also have triangle squares already sewn together, which will be used in a future project. 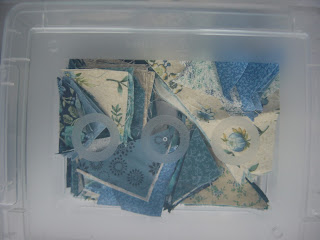 Diane's Christmas Garden is coming along well. She is already past the halfway mark. This one was started on the 28th of November.

The red work blocks from Judy, was also squared and turned into a small quilt top.  It will need a border fabric as well. It is at the top of this post! 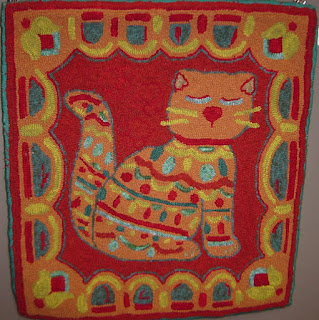 This year all the gifts needed to be finished before the end of October, as our son and his wife was coming for an unexpected visit.  They offered to take the gifts with them to the rest of the family. 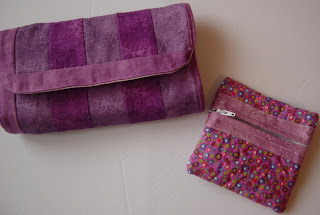 A mani-pedi pounch, as well as a small zipper pouch. She loves purple. 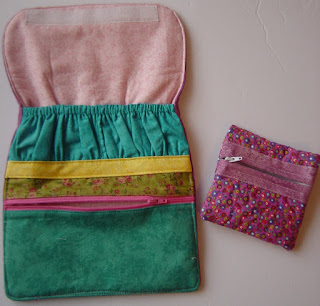 After they arrived, they requested a few extra items, some for a young lady and a lad of almost six.
Made him a dinosaur pencil case, forgot to take a photo of that one. 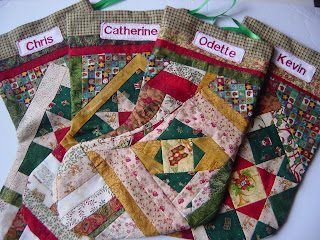 Three stockings only needed names, the fourth one had to be made from scratch.  Thank goodness I had some leftover fabrics from the original stockings. 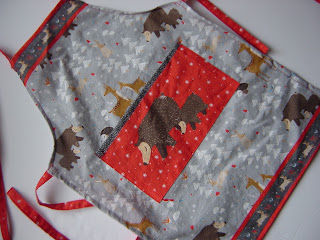 An apron for my Nephew's little son.  He loves to help his mom to bake.  Except, baking is a messy business.  So he needed an apron, found this one at The Sewing Cafe. 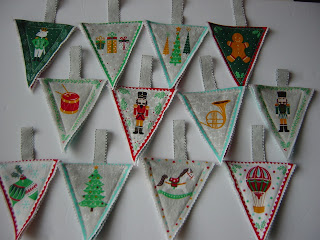 They also needed something for the Christmas tree, as they moved countries recently and has to start all over from scratch.  Snow is something they encountered for the first time in their lives. 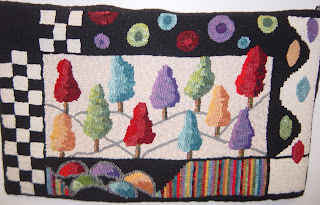 Our local library had a  display from the rug hooking guild. 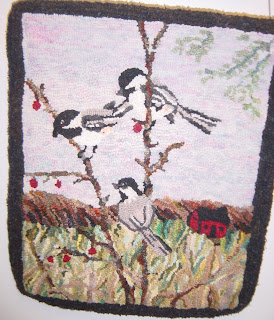 The wheel turns. Each day that pass, is a few baby steps in time. The past couple of weeks has been tumultuous. Grief has a way that put everything into perspective and makes us look at life very differently.  Trying to do ordinary things, turns out not to be. I decided to make a baby hat, knitted it, then looked at it after it was finished. It would not survive a wash, stitches was dropped, without me even noticing.  It will be ripped out and it will be redone at a later stage. 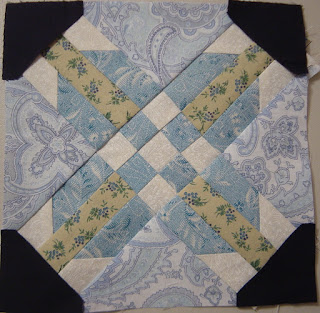 The only colour which matched the emotions, was blue.  365 Challenge Quilt from 2016 was opened up.  The blocks was done up to the7th of October. 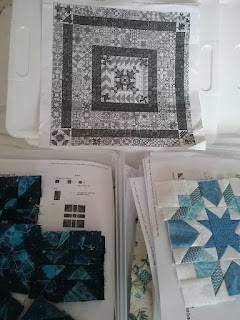 This quilt-a-long should have been done sooner. It was not, I stopped in August that year, as we were all going to surprise our dad with an 80th Birthday party, to celebrate this milestone. Surprised him, we did! He thought we all came together for my niece's wedding? The memories will always be with us, to comfort us and to remember our loved one's, no longer with us. 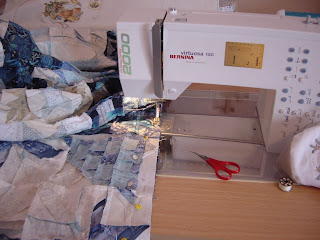 Blue and then some more blue blue blocks have been sewn these past couple of weeks. All the blocks are sewn, they will be sewn together soon.  (The Splendid Sampler was another quilt-a-long which was started the same year).  It had two blocks a week, after 50 blocks, that one was done for me. So it was packed up and put away until the time arrived when I knew how the blocks had to put together. In September while we were out West,  it had its own "aha" moment. So this top will get finished up as well, after 365. 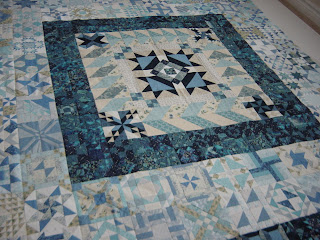 The fabrics for both quilt-a-longs was from fabrics I already had.  The blues was collected and they just never had a purpose,  knew one day the right pattern would come along. 365 is definitely a hungry caterpillar quilt, which required a lot of fabric. The Splendid Sampler was perfect for the French General Fabric, left over from a mystery quilt. Fifty blocks later, a lot of scraps left over, which will be used to make a scrappy quilt. 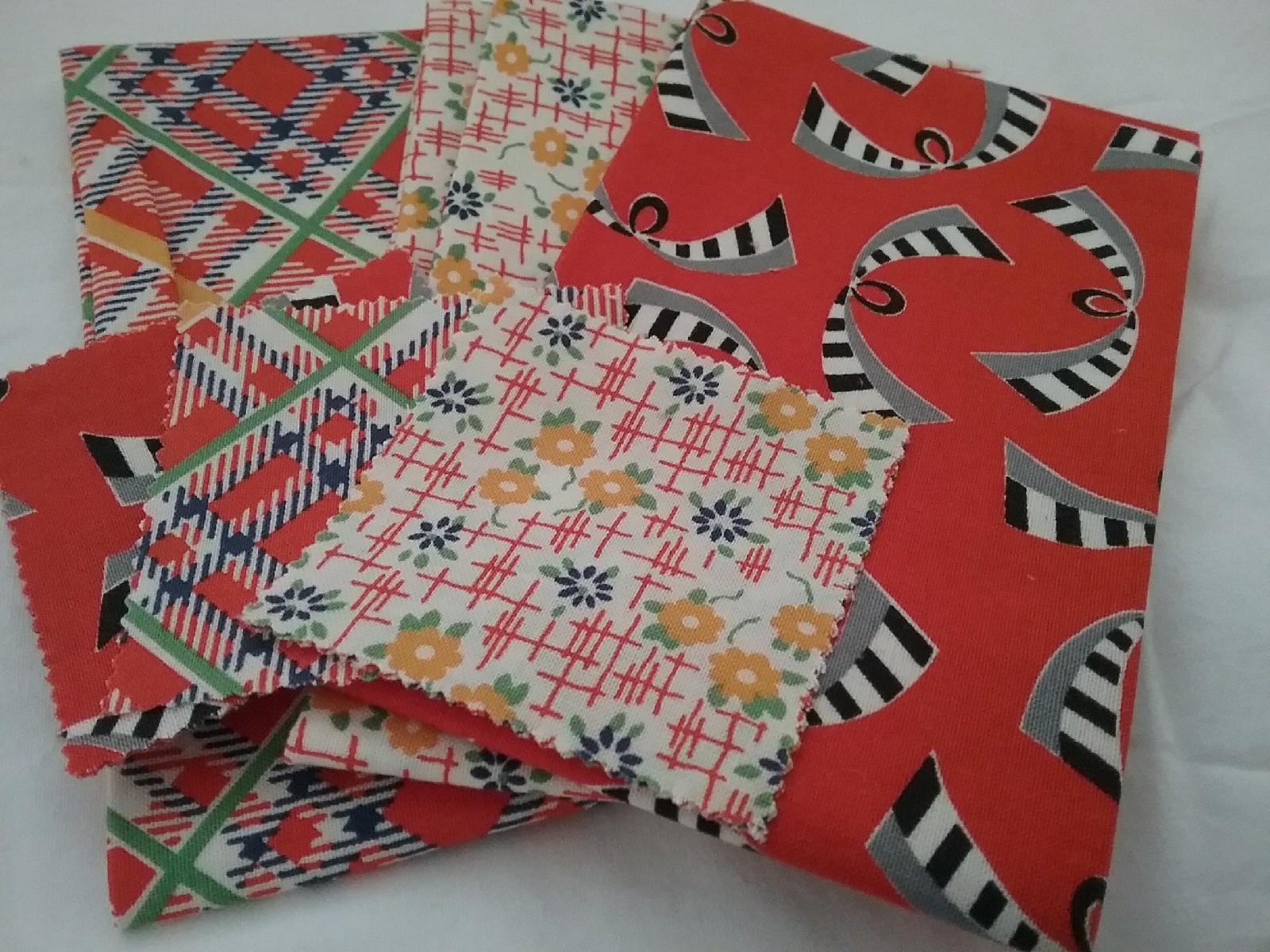 Technology makes inspiration easy to find us. While watching a stitching video, on Flosstube.  A quilt-a-long pop up in a sidebar. It looked interesting,  I though about it and debated whether,  I should join another quilt-a-long?  When the first two which was started in 2016 and was not finished yet?  This was in September,  in October I saw some fabric bundles, they were bright and happy, just right for said quilt, so this was it.  I signed up (forgot all about it, until an email arrived reminding me of the start).  The first part was released on the 28th of November.  My first row is sewn, it looks very modern and bright. It has a very young and happy feel to it.  It is cheering me up, so it came along at just the right moment in time.

Orange is the first row, with one accent block? Hashtags.

Had this   ruler fabric in my fabric stash for a while, it turns out, it is by the same fabric designer.

The first two quilt-a-longs now is the projects for December.  Getting the tops done before the new year.  One done, one to go. 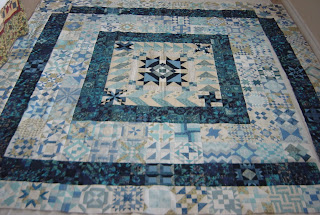